REGISTER FOR OUR WEBINAR

Today’s working realities and increased adoption in electronic communications and information technology tools have introduced new challenges within our working environments and what is expected from workers.

A broad discussion on the introduction of further protections to the workers against these growing realities is essential.

The implementation of a right to disconnect should be based on balancing the rights and interests of all those participating in the digital economy and does not necessarily need to follow a direct legislative path.

The Malta Information Technology Law Association (MITLA) has been following closely the proposals being made at the Parliament of the European Union in relation to the right to disconnect and the strong favourable vote achieved within the same institution. MITLA congratulates Maltese MEP Agius Saliba on pushing for this proposal which can spark a wider discussion on the potential further recognition of such right to disconnect mechanisms.

The right to disconnect is a proposed right regarding the ability of people to disconnect from work and primarily not to engage in work-related electronic communications such as e-mails, calls or messages during non-work hours.

MITLA embraces the principles surrounding the right to disconnect as an important step towards embracing the opportunities posed through the increased adoption of information technology to push the digital economy whilst at the same time protecting worker rights. Additionally, careful consideration should be taken when labelling a right as ‘fundamental’ which might not necessarily be the case here. Labour laws are rife with various rights granted to workers through various directives and regulations including those relating to working time, collective redundancies, part-time work conditions and others.

In January 2021 the European Parliament approved a resolution with recommendations to the EU Commission on the right to disconnect. In essence this recognises that digitisation and digital tools have presented the paradox of productivity advantages but also giving rise to a number of ethical, legal and employment related challenges, such as intensifying work and extending working hours, thus blurring the boundaries between work and private life.
In conjunction with the positive vote achieved in the EU Parliament, MITLA considers that the position currently taken by the EU Commission, especially through the pronunciations and statements made by EU Commissioner for Jobs and Social Rights Nicolas Schmit during the same debate in parliament leading to the vote, should serve as the cornerstone for further explorations on the right to disconnect where social dialogue, the participation of social partners as key stakeholders as well as discouraging one-size-fits-all solutions even across Member States could be a the ideal route.

MITLA agrees that, without diminishing the importance of such important developing debate, progress in recognising and introducing a right to disconnect should be propelled through the lead role of social partners and that progress in this field, as is the case with many other issues affecting worker’s rights, cannot only be realised through legislative intervention but through agreements and negotiations between all parties involved, and this as enshrined in Article 154 of the Treaty on the Functioning of the European Union.

The right to disconnect, is already available in a limited number of European States and this did not automatically necessitate the introduction of mandatory legal provisions. European law provides various mechanisms by virtue of which different stakeholders can come together and negotiate a comprehensive position to which such stakeholders would be bound without requiring an ad-hoc Directive. Such an approach would reflect the various national nuances and cultural, economic and legal realities existing in the various member states in order to achieve best practice benchmarks.

In light of the complex nature of the right to disconnect, rushing directly towards legislative solutions, at EU or national level without exploring non-legislative paths should be avoided.

MITLA is currently working on a detailed position paper on the subject of the right to disconnect and shall be organising a webinar on the 23rd March inviting a wide array of stakeholders,representatives and the general public, in order to understand better the various positions prevalent in Malta with respect to the right to disconnect. 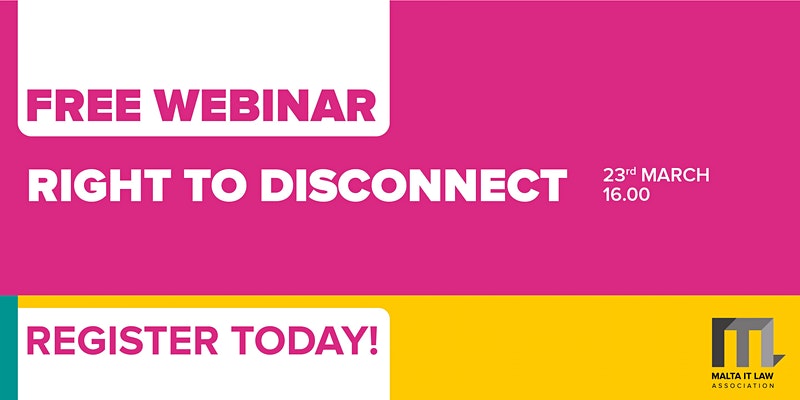